Q&A with Jimmy, creator of the A500 “mod” AMiNIMiga 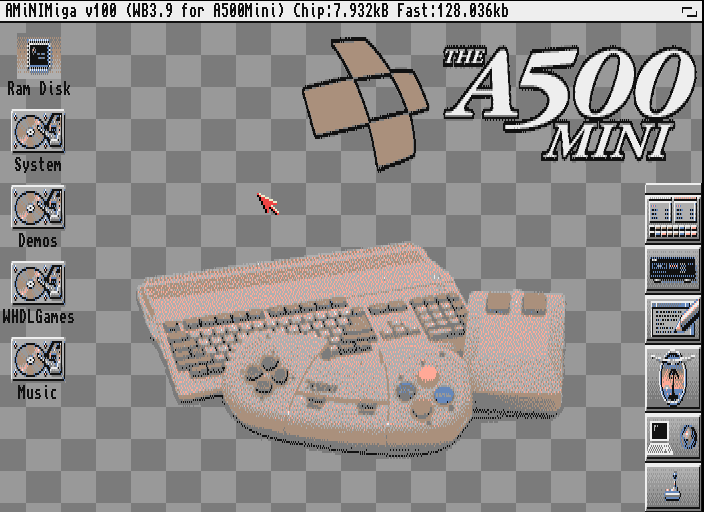 We’ve been heavily involved with the Amiga Mini since it arrived on the scene. We’ve lots of developments for the system but by far AMiNIMiga has been one of the stand out achievements in the community, showing what both the hardware, software and skilled Amiga enthusiasts can do.

AMiNIMiga is a ready-made Workbench for your A500Mini containing some of the long-forgotten and abandoned software you knew and loved from your youth. Not only does it include pretty much every game ever made for the Amiga but also DiectoryOpus 4, ScalaMM, FinalWriter, Eagleplayer, Hippoplayer, ProTracker, DeluxePaint, Brilliancs, Real3D, Lightwave, Amos, AmigaE, BlitzBasic.. The list goes on!

We reached out to the legend that is Jimmy, the creator of AMiNIMiga with a few questions about his epic work on the project and also a little about his history with the beloved Amiga.

How long have you been tinkering with Amigas? What was your first machine?

I got my first Amiga at a pretty young age, it was my father that brought home an A500 in the late 80s. Before that, we had both a Commodore 64 and a NES, but the quality of the A500 really blew me away mostly the Music, which I still love and I listen to MOD’s almost every day to this day!

The Tinkering started years later at around 1995 on my A1200 030/50Mhz, I have always been enjoying messing with workbench to make it look like I want and be my personal OS. I also for some time ran a BBS locally here in Sweden, wrote my own BBS Doors etc, and did some game programming as well.

I have to say so far I have really enjoyed my A500Mini, maybe that makes me not being a “real Amigan” judging from the lukewarm welcome in the “hardcore” community ;). Mostly I’ve been using it as a fast easy way to get some MOD’s in my Studio monitors and also been tinkering a fair bit with AMiNIMiga of course ;).

I have heard from many people not having an Amiga since their youth picking up the A500Mini and easily being up and running and reminiscing in just a few minutes, that’s hard to beat!!

What inspired you to create the Aminimiga distro

I just like installing Workbench :), I have so many installs lying about, from 1.3 to 3.2. Both 8/16 colour and RTG setups. For the A500Mini I wanted a fast installation for my own use, for playing MOD’s and messing about with WB applications. It just happened to get a lot of traction in the Facebook group from the pictures and YouTube videos I put up, I got a lot of requests, and after finally managing to get Workbench to boot without any “tricks” or annoying Amiberry GUI to show up (A first), I decided to make a release if sorts.

What does the future hold for Aminimiga?

I’d say the future is bright, I have just around the corner a “fully loaded” version coming with a complete RetroPlay WHDLoad Games and Demos collection, I will continue to install HDD games that don’t have WHDL installers. I also take requests from users on my Discord server for games and applications.

I’m also working on a completely different RTG version of AMiNIMiga, which will be called AMiNIMiga RTG, it will be able to use modern screen modes for 16:9 displays and 16million colors instead of 16 colors, i promise something beautiful and special here, teasers will come in the discord server aminimiga-rtg channel 🙂

How can people get hold of you?

I would like to give a shout first to my Beta testers, I know time is a commodity for most of us adults and they choose to spend some  of their time testing AMiNIMiga and continue to do so!!, I am very grateful! I would also like to thank the kind people that have offered me a beer/coffee in donations, i appreciate it immensely. And I will continue to post “inside” information, information on what’s next first and early test releases in the donators channel on discord!

Not easy to answer with only one title, is it 🙂 I’ll make a short list of some of my top Amiga games in no particular order 🙂

Thank you Karl at Retro32 for your interest and support of AMiNIMiga!

We’ve been busy of late and things have moved on so we fired some updated questions over to Jimmy to help fill the gaps since our original chat.

It’s been a while since we last interviewed you. How has AMiNIMiga gone down in the A500 mini community:

The support and response from the community has been huge, way bigger than I ever could imagine. I recently started the AMiNIMiga Facebook group, it collected over 300 users on the first day! It’s crazy.

How has the distro developed with the feedback you’ve been getting:

In the discord server, I have a requests channel, and I try to implement all requests as far as possible. And the big response has just made me work on it even harder, with more versions planned (RPi4/400, MiSTer, PiStorm)

We’re all patiently waiting for the RTG version of AMiNIMiga. Can you give us clues as to what it will bring:

Beautiful 16Million colour wide-screen Workbench :), but also RTG games, like Diablo, Doom, Foundation. And more productivity applications are coming to that use the bigger screen modes. (scroll down fo the sneak peak video)

We understand you have been working with RGL (Retro Games Limited) on their recent firmware update that seems to have nerfed many of the features we know and love. Any news on what we can expect from them? Were they supportive to the community and are there any features you’d like to see added to the machine?

I have reported bugs i have stumbled upon, like the JIT bug introduces in 1.1, which they had a fast fix for with 1.1.1 among other fixes. Other bugs I have reported, like the custom-cfg shutdown bug, their interest has been low as it doesn’t concern their built-in games. I have also made some requests regarding AMiNIMiga for the future, we’ll just have to wait and see if anything get implemented by RGL. I’m really hoping for networking in the future, it’s also one of my requests, and of course updates to the Emulator that is far behind on the A500Mini Vs Raspberry Pi.

I have also made some suggestions on ways to get the nerfed feature back in a safer way. Let’s hope it can be added in future firmware.

Full instructions on how to install AMiNIMiga can be found on the AMiNIMiga website, failing that we offer USB sticks ready to rock with AMiNIMiga preinstalled from our shop below (working in partnership with Jimmy)