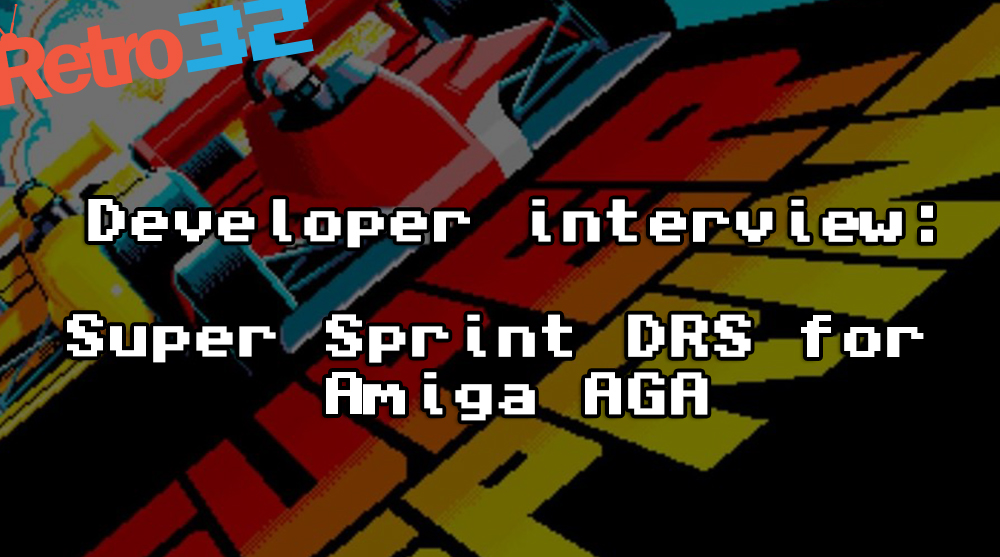 If there’s one coin-op that sums up my childhood it’s Super Sprint. Frantic 3 player wheel-spinning action combined with that satisfying clack as you stomp down on the accelerator pedal, as an 80’s kid, this was the pinnacle of arcade gaming.

Released in 1986, the Amiga never saw an official port of Super Sprint, however, it was released on Amstrad CPC, Atari ST, C64, NES and ZX Speccy.

Amiga developer Graeme Cowie is looking to change that with his port: Super Sprint DRS for Amiga AGA.

We were given the chance to interview the developer Graeme Cowie to learn a little more about the development of this iconic game.

How long has it been in development?

Wow – OK that’s some going! It’s looking epic. Did you start from scratch or are you adapting a previous port?

I started from scratch, but many of the routines I’m using are taken from my previous games and my amiga game dev series. Development has been rapid because of that. It’s a direct arcade port, but is using the amiga hires interlaced mode

OK, judging by your YT channel (link here)  you’re not new to the Amiga. Do you have any other games or worked on any published titles?

I was looking for a nice small project while I’m in lockdown. Plus I used to love playing the game with my friends on the atari st. But the amiga never got an official port from the arcade so that’s another good reason.

I remember it as a kid and used to love the coin-op – all those wheels! Will it support 3 players?

Ohh yeah, no point doing it if it doesn’t support 3 players. Gonna try and get hold of some paddles too to see if i can get them to work.

Will you be keeping it true to the original or adding any extras?

I like formula 1 so I’m adding drag reduction system to it which means that in specific zones on the track the cars can get a turbo boost to overtake. Apart from that it will be faithful to the arcade as much as I can.

That’s a great idea, it’ll certainly add a new dynamic to the game. That covers my next question about what DRS stands for

Yeah, I think it will be really good

How long until you expect a release? Will it be free – I see people can donate on your website

It will be free like my other games. I don’t want to commit on a release date but I’m hoping to get it done by September. It will need a lot of testing – especially on netplay.

So you’re planning a for a true multiplayer experience?

Yes, gameplay multiplayer will be king on this one, if people are in lock down due to covid then they gotta be able to netplay.

Will it run OK on a stock 1200 or would you suggest some extra ram / accelerator?

Yes stock machines, all my games are like that – I write them like they were back in the day. No need for accelerators. It will be supported on A1200, 4000 and the CD32.

Thanks for taking the time to chat with us about Super Sprint DRS for Amiga AGA. We’ll be sure to keep our readers posted with your progress and look forward to a release

Nice one and thanks for your interest in the port, really appreciated.

No mate thank you. It’s great to see the Amiga scene really thriving

Thanks buddy, agree the amiga scene is getting much better these days.

For further updates on this project be sure to check out the Super Sprint DRS facebook page and his official website https://www.amigagamedev.com/