Mini interview with H0ffman – Metal Gear ported to the Amiga 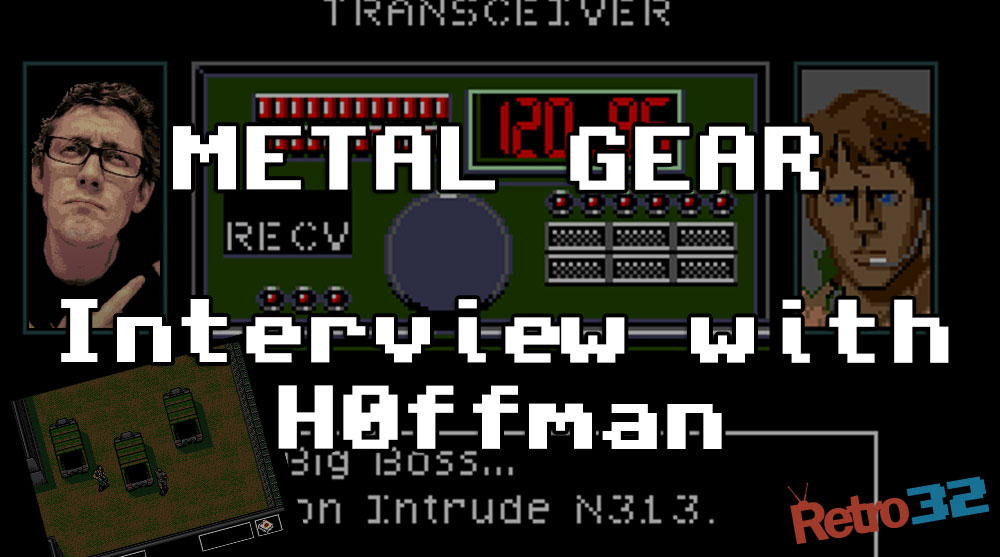 Just 34 years after the original Metal Gear was released for the MSX, legendary Amiga DJ and Demoscene legend H0ffman has released a port of this epic game that spawned a whole new franchise. So rather than just churn out another press release about yet another amazing Amiga game, we reached out to the mighty H0ffman himself about his epic port of Metal Gear and delved a little deeper into his involvement in everything Amiga.

Firstly, thanks for taking the time to chat with me today. We’ve seen a lot of news about your port of Metal Gear, how long did the whole process take you?

I’ve listened to the soundtrack, it’s f*cking epic. With your music background was it one of the biggest parts of the game you wanted to improve?

Thanks pal. Audio is where I could offer the biggest improvement. I can’t do graphics on account of not having the skill but also having red-green colour blindness. While I liked the soundtrack I wanted to put my take on it. Sound effects were something I really wanted to improve as well.

Were there any limitations of the Amiga the proved difficult over the MSX version?

There weren’t really limitations as the amiga has more ram and is far more capable. However, my first attempt used sprites as they were a good match for the MSX hardware. Ultimately though I ran into problems trying to get enough of them on screen. Once I switched to using the blitter everything was much more solid. The biggest limitation I came across was RAM, in particular, chip ram for audio. Music and sound effects were getting large so I had to employ multiple compression techniques to fit everything in.(edited)

I’ve got your cave sessions vinyl – what an amazing LP that is. Have you got any plans to release this or any further music physically?

No plans at the moment for any physical music releases but we’ll see what comes about. I have an idea for another album but it’ll be a big project.

I’ve been following the Amiga game dev discord – a lot of it goes over my head tbh. Do you feel that the renewed interest in the Amiga – new hardware/software is bringing about a wider audience?

I discovered the discord not long ago. There’s a great bunch in there and it’s a nice place to share ideas and techniques on how to achieve things. I’ve not followed the games side of things too much over the years but it always seemed quite quiet until recently where things seemed to have exploded.

Are you working on any further ports? I’ve been helping with some beta testing of 1942 – it’s great to see some of the classics being renewed so many years after the Amiga stopped production

I’m not working on any ports at the moment but I have my eye on a couple of things that might be taken up in the near future.

What’s the feedback been so far? Have you had much feedback from the MSX community? I watched your interview with AmigaBill – and he asked if Konami had sent the boys round yet? All quiet?

The feedback has been fantastic overall. It’s been really great watching people play it on streams and really get into it. I thought that some people might not like the revised soundtrack because if you’re a fan of the original it might be a step too far but that’s why I went to the effort of adding the emulated sound option. The MSX scene has been pretty cool with it too but really this port was intended to bring the game to the Amiga community who might not have had the exposure to the MSX and the amazing catalogue of games Konami produced for it. No news from Konami as yet. Someone did tag Kojima in a tweet recently but I don’t think he read it. I’d love to know what he thought of it though.

I think you nailed it. Pulling on what the Amiga really does best in its generation. I’ve been watching your PT-1210 streams too and getting waaay to pissed. Any new music coming out? Love your revision entries too. Way to Rude has to be one of my all-time favourites – just so sharp. Are you involved with the PT-1210 development at all? I think I mentioned it in one of the streams but it would be great to have a walkthrough of your setup

No new music at the moment. I’m currently working to get a Sharp X68000 back on its feet and working so who knows what will happen with that. I work on the pt-1210 dev side on and off with d0pefish and akira. It’s a complex and time-consuming project but hopefully, there will be a revised version soon.
I’d love to do a video about the whole setup and how it works but I haven’t got the video production chops to put it all together. Maybe I’ll ask some of my YouTube friends to help out

We’ve love to see that, I’m always amazed by the quality of your sets, all from an Amiga 600 I’m guessing you have a full-time job too, must be hard to balance it all.

Crazy how many of us work in the IT industry? I’m a tech for a software company

Keeps us technically sharp without stealing all our creativity.

Lastly, what’s your favourite Amiga title from back in the day?

Game… dam it… Hahaha… I think probably flashback. The first copy I had was an early preview all in French but I still played it as far as I could.

I’ve lost count of how many times I’ve watched that intro. I can hear the beeps every time I think about it! Epic game – the first cinematic openings I had ever seen. Thanks for your time this late on a Tuesday. I’ll be sure to share all your links on where to download the Metal Gear for the Amiga, the Soundtrack and all your other social media links

Awesome. Thanks mate, really appreciate it.

I’d like to thank H0ffman again for his time, it’s great to dig that little deeper with the guys at the heart of the Amiga development and creative community. It still amazes me that there is such an active community behind the Amiga, from someone whose main interest has always been in playing games and collecting hardware – I’ve never had the exposure to the other side of the fence.

That’s quite enough from me, here are the links you need below. Make sure you follow H0ffman on Twitch, his PT-1210 sets are absolutely stunning, his dual Amiga 600 positively sing! Next time we look at spending a little more time with H0ffman, digging a little deeper into his music background and his experiences in the Amiga demo scene. Let me know in the comments if you have any questions you’d like us to ask

Be sure to check out H0ffman’s track Way to Rude – below I play it on a 20ft screen on the side of my house. The neighbours loved it! – The action starts at 2:51