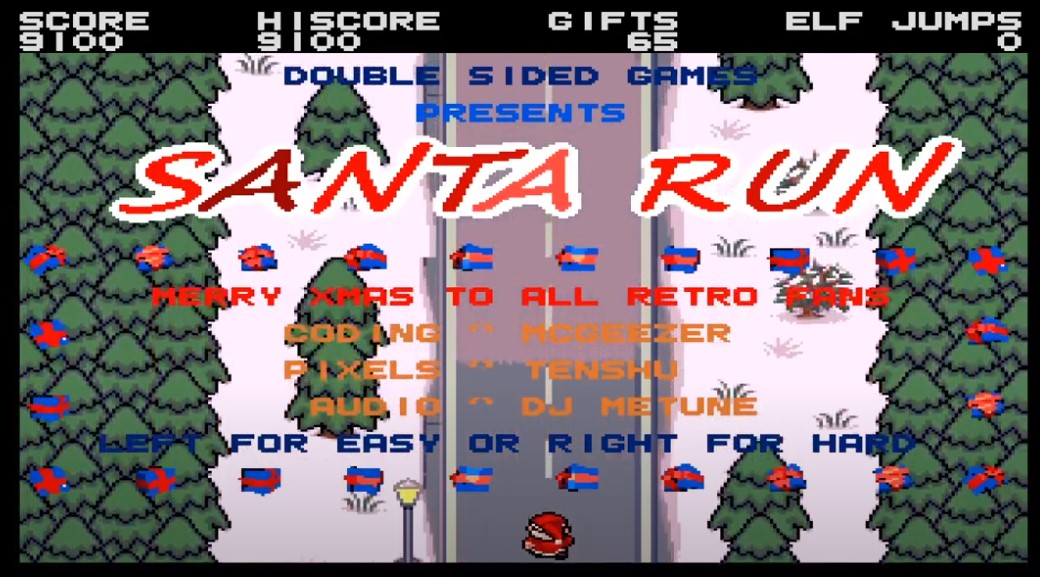 We’ve been following the development process of Santa Run over on Gearmie’s Youtube channel – link here and it’s finally ready and ready to download. It’s amazing to see how the group has managed to turn around such a polished game in such a short timeframe. As expected, it’s highly addictive and the soundtrack is epic. We’ve been humming the tune all morning.

What is Santa Run?

Santa Run is a free Amiga Christmas game that was created in seven days for all Commodore Amiga fans.

Control Santa as you leap from roof to roof and deliver presents down the chimneys.

Santa Run is an AGA game. You’ll need a machine with Amiga Advanced Graphics Architecture (CD32, Amiga 1200, and Amiga 4000) or you can emulate it with WinUAE.

How to Emulate an Amiga in Windows (WinUAE guide)

How to Play Santa Run

In the Title screen you can push Left for easy mode and Right for hard mode.

Push Fire button to leap from one roof to another.  You can jump when not on a roof but doing so will use up a special Elf jump.  Use Elf jumps sparingly to avoid not landing on a roof.

Push Left and Right to throw gifts into the chimneys.

You can building score multipliers by chaining gifts in to the chimneys without missing.

You can download Santa run from the Santa Run page on itch.io

Please support the continued Amiga game development by donating to the team at Double Sided Games. When downloading it from their page please consider making a donation to show appreciation for this cracking little game.

What are your thoughts on Santa Run? What’s your high score? Are you developing an Amiga game and would like to have it featured on Retro32? Let us know in the comments below